History of the Williams Ranch

The Williams Ranch was first settled by Albert W. Bradley in 1878.  The overlooking 9,489 foot craggy peak adorns his name as it meets the fertile Tarryall Creek Valley.  According to Park County, Colorado – Local History Archives, when Bradley settled his claim in 1878 he had paid $200 for 160 acres.  He then stated in his claim that a small bunk house, stable, and corral had been built by S.M. Lasell before his settlement.  Bradley further developed the land by constructing another slightly larger house, irrigation ditch, and plowed ten acres where he produced oats, vegetables and hay. 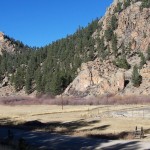 With the peak of the gold rush in Colorado, the year is 1859.  John E. Williams, a Welsh immigrant, sought fortune in mining at Tarryall Gulch; above present-day Como, Colorado.  After mining in Colorado for seven years he ventured to mine in Montana and later ranched in Kansas before completing his return to Colorado.  John and his wife Mary then later settled into the Tarryall Creek Valley in 1882 neighboring Bradley.  Williams purchased the ranch from Bradley in 1885 and this portion of John E. Williams’ property would eventually be passed on to son Albert then to son Edmond.  Catering to the Leadville boom, the still standing corral and stable operated for five years until his death in 1887.

After the turn of the century in 1927, son Edmond Williams began to affect his stamp on the inheritance at Williams Ranch.  On the east of the ranch he converted his father’s freighting stable to sawmill and began the toiled work of erecting the large hand built cabin on the west.   According to folklore, refusing help from neighbors, Edmond and a single mule peeled the large pine and used a half-dovetail notched construction to provide the stoutness of this building.

Present day the cabin sits in a renovated style overlooking the Williams Ranch almost a century later.  Protected by a conservation easement and deemed by the Colorado Historical Society as a historic property; this ranch is a prime example of a ranching complex from the mid to late 19th century.  Come experience the rustic, fulfilling, serene way of life in this fertile valley.  The Historic Williams Ranch combines the pure and unspoiled challenges of Rocky Mountain fly fishing and big game hunting in an intimate and fruitful setting of the West.